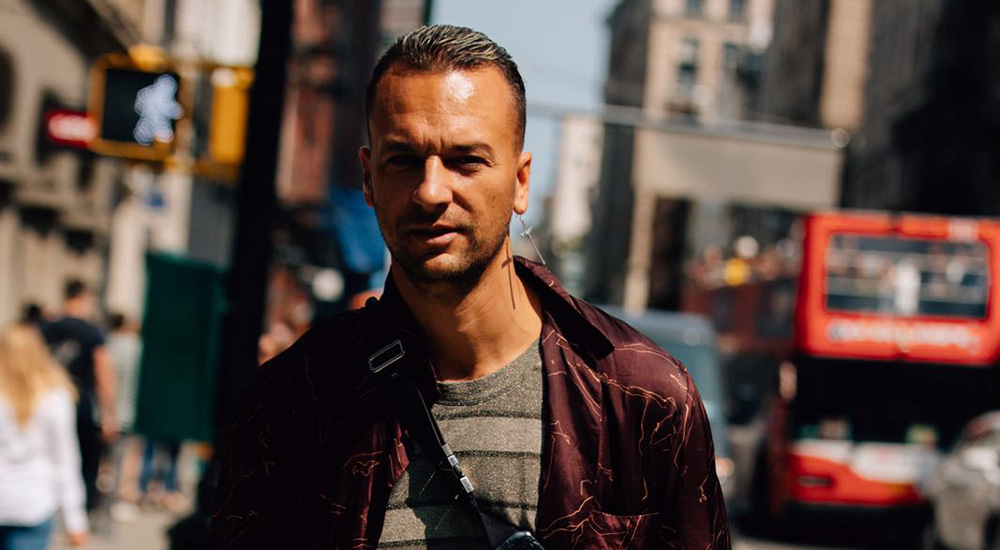 Perhaps best known as Bleu Mode, Julien was born in Sète, a French town on the Mediterranean Sea. It’s likely from vivid blue of the sea that he derives his artistic pseudonym and his passion for colours and for photography. Relatively new in the world of street style, active since 2013, he loves to document the evolution of fashion over the years, capturing what he loves to define as the “decisive moment.” Thanks to his sensibility and his extreme attention to detail, Bleu Mode manages to capture in a few seconds that which is invisible to most people. To date, Boudet collaborates with brands such as Thom Browne, Adidas, Uniqlo, and magazines like CR Fashion Book and Elle Us with a particular fondness for emerging brands and sportswear. He doesn’t want to be labelled as a street-style photographer, since he also works in other photography styles: from documentary to fashion editorial to architecture.

Who is the most important influencer on social media?
I think first it’s important to define what kind of importance are we talking about; is it the influence of a celebrity (actress, rapper, basketball player…) on his or her fans, the influence of a medias on their audience, the influence of a blogger who actually built his career using social media. There are a lot of different aspects to take into consideration. That said, the most influential person right now would be by definition someone who has the most followers on Instagram. Yet, if we take a specific field like fashion for instance, I would say Virgil Abloh probably has the most influence right now, because he reaches a lot of people from very different backgrounds- whether you like him or not.

Do you consider yourself an influencer considering your social following?
Regardless of what you do in life, you will influence people around you, whether in a positive or a negative way. If you are successful in what you do, you will obviously influence and reach more people. The only difference is the number of people you reach; for example someone who initially has a big following for his work (as in my case working as a photographer) might become an influencer himself because he was already able to get people’s attention in the first place. Hopefully, through my images and my style (both ways of expressing myself), I do positevely influence people, but I don’t consider myself an “influencer.”

How important is social media for your work?
To be perfectly honest, it has been essential for my work. I started out as a photographer in January 2013, and thankfully I have been able to stand out from the masses and get more and more people interested in what I do, only thanks to social media, in particular Instagram. I still get a lot of jobs through this platform, so yes it is still very important, even now.

Do you also use your image to promote your work and get more likes and followers? Does it, or doesn’t it work that way?
I do use my image to promote my work, and a lot of professionals that I know encouraged me to do so, because it’s important for your followers to see who is behind the account. It adds something to it, it feels more real, more personal. I don’t like it as much as I prefer being on the other side of the camera but I try to do it a little more. However it isn’t to get more likes and followers.

What content performs best online?
I guess it all depends on your audience. We all have a very different audience, and if a fellow photographer (with the same following for example) posts the same look I posted it won’t necessarily have the same engagement.