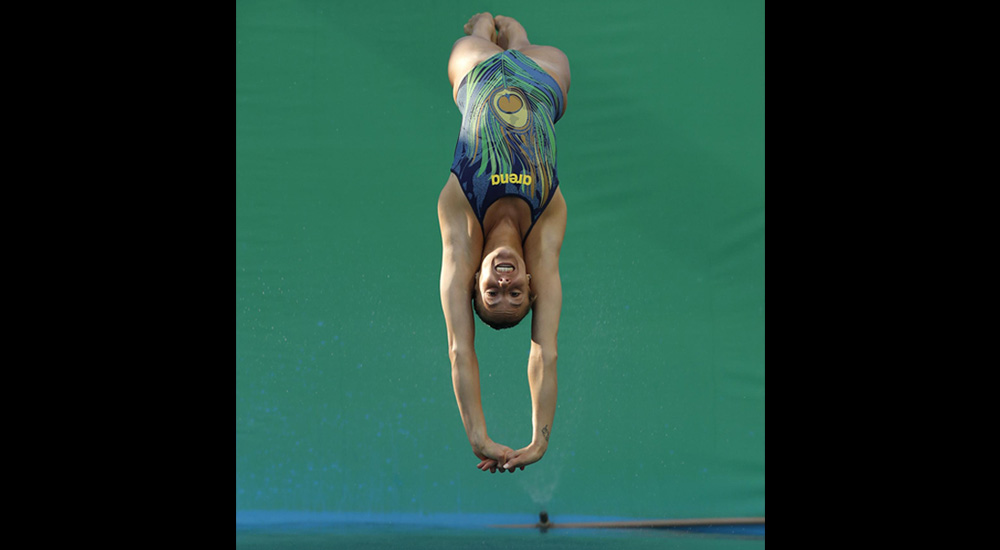 Resilience.  It is perhaps the best word to describe Tania Cagnotto, Italy’ most accomplished diver ever and winner of two Olympic medals and a world gold medal.  After two bitter fourth place standings save for a few hundredths of a second in the London Olympics in 2012, the champion from Bolzano bounced back, going on to win the silver medal in the three-metre synchronised dive with Francesca Dallapé and an individual three-metre bronze in Rio in 2016.
Her resilience and determination led her to end her brilliant career winning the one-metre title at the indoor Italian Athletics Championship in Turin.  A “slam” of a closure, literally.  On her concluding dive, she waved to her public, ending with an explosive cannonball splash, as requested by her fans on social media.  With this interview, MANINTOWN dives into the life of the champion.

What was the most important thing you learned from your years of being in the water?
Definitely, it is to have respect. The water us something that can relax you, but teach you at the same time. It is always present, in the sea, whether for sport or for fun. It is essential.

In sports, the guidance of parents and professionals is fundamental, and in your case the two figures coincide. What role did your father have in your decision to dedicate yourself to diving?
My father definitely taught me so much, as did my mother, because they had the same experience and knew how to advise me. But they never pressured me, and that was one of the most important things. And maybe for that reason I went so far, because they forced no expectations on me.

How did you find the strength to keep going all these years?
When I was young, I began diving for fun, I had my diving team and I never missed out on anything: I had my friends and I had the sport. All together. I had everything I needed. After London, it wasn’t easy for me, but I felt that the only thing that would have made me feel better would be to win. Instead, after the World Aquatics Championships in Barcelona, I had my four best years, at the end of my career. It couldn’t have gone better.

What was the highest point of your long career?
Definitely Rio, the medal from the synchronised dive.

What is one thing you want to do that haven’t done before, perhaps because of your training schedule?
Just enjoy being home, without having to train, eating whatever I want.

What is your relationship with fashion?
I like it a lot, in fact now I want to dedicate myself to it more. I like going to fashion events and want do to more of it.

What garment represents you the most?
Dresses. Short ones, because I am tall, 6 foot 2.

One yet-to-be-fulfilled dream?
Maybe to be part of a nice diving team again, one day.