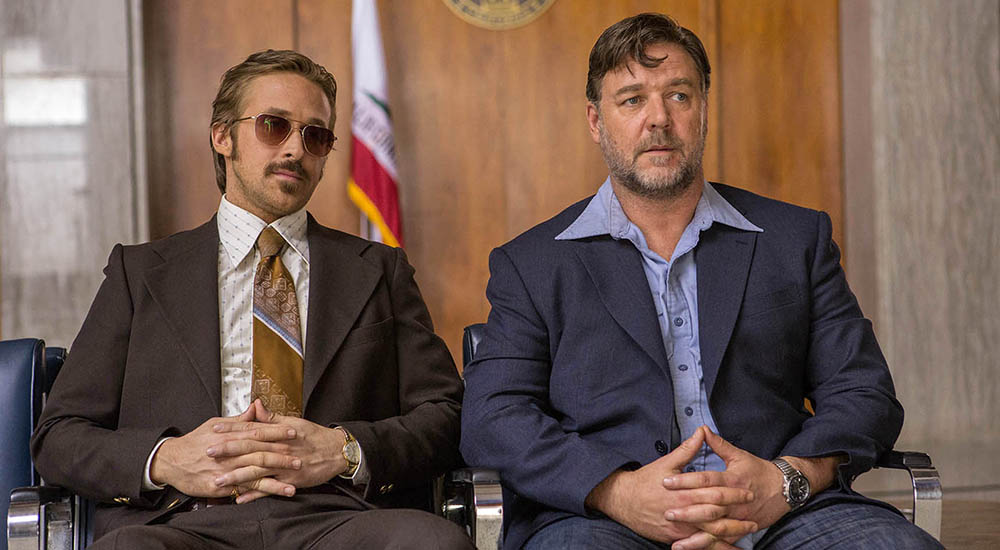 Put two freaks and hilarious guys togheter, two adorable idiots completely poles apart in a vicious and opulent’s L.A, add a nosy girl, much wiser of the two Starsky and Hutch‘s rivals, put even an ironic and light-hearted glimpse into the world of American pornography, seen in a satirical key inspired by ‘Boogie nights‘; legend, shake all wisely with colors, strobe lights and lots of laughter and you’ll get the new Shane Black movie, ‘the nice guys‘. Produced by Joel Silver (the same of ‘Lethal Weapon’) and distributed by Lucky Red which brought in Italy the two hilarious and fascinating actors Russell Crowe (in the role of Jackson Healy) and Ryan Gosling (the clumsy crook Holland March) the film tells the story of two would-be, hopeless detective who put themselves on the trail of a porn disappeared starlet, the beautiful Amelia, daughter of the ruthless and moralizer Judith Kutner (Kim Basinger in great shape), aided by their fortune from the instict of the strange teenage – Holland March&’s daughter – the acute Holly played by Angourie Rice. In all this stands the glamorous murderess killer Matt Boomer who embodies the treacherous assassin John Boy. Credit where credit goes to the costume designer Kym Barrett and scenographer Richard Bridgland that catapult the viewer in the euphoric and weird atmosphere of a Hollywood red light party, in the same city where the firts actors of hard genre as Linda Lovelace, the star of ‘deep Throat’ and John Holmes, were born. The film, full of breathtaking gags, actually passes by irony and corruption of a colorful and very trendy L.A to a political fiction conspiracy of gigantic proportions involving some circuits of the US government. Daring chases, full throttle twistle and a saturated and surreal aestethic are the ingredients of a riveting and exciting thriller that subverts the rules of the genre to tack abruptly in a comedy and action where all the pieces of the puzzle begin to stuck to the epilogue.
Well played by two giants of Hollywood, daring and unconventional, this film can be enjoyed in one fell swoop.