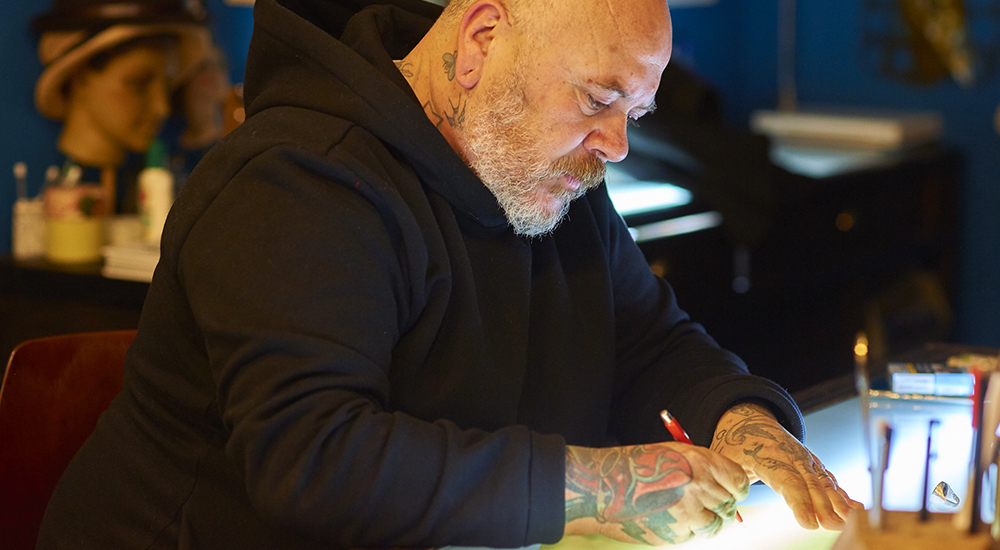 Pietro Sedda has embraced the sea with his art, tattooing. A discipline that he masters and that takes on the appearance of old tales of mariners – those who travelled the seas, sailing from country to country, from woman to woman – and of legendary whales, which led him to become one of the most coveted tattoo artists. Bent on his drawing board, he has chosen for his workshop a name that eventually wound up being his alias: The Saint Mariner.

How did you approach your profession?
I approached tattooing more out of need than out of romantic inclination, thanks to the help of my friends, who have always spurred and supported me.

In what way have the social networks influenced you?
When I started, at least ten years’ experience were needed to work out the secrets of the trade and manage to keep brain and hand well-connected. Nowadays, one can become a star in a matter of six months, even without really mastering the art.

Is it possible to become a famous tattooist, based more on one’s personality than one’s skill?
It has occurs rather often that people come to me only because of my name and not because they follow my work and my research. I sort of lead a shopkeeper’s lifestyle, many people know me, I know nobody: sounds like a perfect situation.

Your relationship with the social networks?
I never participate or comment, I try to be as aseptic as possible.

What do you think of the figure of the influencer?
It seems like a cloudy game to me, more of a divertissement than a job. With MySpace it was different, people went there to show a content, while today it is like jumping into the lions’ cage: they are all judgemental, they are all the best, they must all have their say on anything.

Why, in your opinion, are they successful?
We are lobotomized.

How was the collaboration with Parfumerie Particulière born?
The guys from Parfumerie Particulière involved me in a project to illustrate the packaging. The whole thing lasted one year, but it was very gratifying: eight out of twenty initial illustrations have been selected. The last one, Madeleine, was born at first as a female illustration and then it evolved into the current status, a genderless figure, with a male face. “Pietro Sedda – The Saint Mariner” is due to be released in March, with a fragrance reminiscent of the sea, the drunken sailors and their crazy life.

What is your take on the much-discussed gender topic?
I don’t judge sexuality. For many years I have supported the queer culture, rather fragmentary in Italy, though, at the same time, very active too. If a little girl, one morning, looking herself in the mirror found out that she is actually a boy, it’d be fantastic, but it all depends on the social contest, life conditions, and on one’s parents. In the tattoo world, originally a world of motorbikes and boobs, there was plenty of homophobia. Until few years ago, people hardly ever chose the face of a man for a tattoo, preferring the one of their woman. My work has also involved finding the right customers.

Sea and sailors have always been the fil rouge of your work. Where do they come from?
My workshop in Oristano overlooked the sea; it was before my eyes always, also in winter. Contemplating it makes me feel good. It’s the only thing this perfect city, Milan, lacks.