Milan, Fabbrica del Vapore. It is a journey around the life of Frida Kahlo, one of the most emblematic female characters of the 20th century and queen of Mexican art told by the curators Arèvalo, Matiz, Ancheita and Rosso. Her demons, obsessions, mental flows and the tormented relationship with the husband Diego Rivera are described through her letters and diary.

Casa Azul, her mansion in Coyoacán, is faithfully reproduced with the large canopy bed and the mirror used to portray herself even when laying in bed due to illness and where she died on July 13th, 1954. Paintings and photographs, books, and her personal crutches. Her studio is reproduced with her desk and all the little bottles, filled with colors and brushes, Frida’s diary, the stuffed red chair, the wheelchair and the large easel.

Her art is the background of the Mexican Revolution, a historical period that brings her into contact with intellectual figures of the time related to the communist party, such as the Russian revolutionary Lev Trotsky and the poet André Breton.

Her paintings according to Diego: “Communicated a vital sensuality to which was added a spirit of ruthless observation, but sensitive… It was clear that she was a true artist”. Within those images, the themes most dear to her, including music, death, Christian iconography and martyrdom. Her recurring themes were music, death, Christian iconography, and martyrdom.

A section that forces us to enter into the depth of her magnetic personality well portrayed in the work of renowned Columbian photographer Leonet Matiz Espinoza, with his inseparable Rolleiflex, who created iconic images of Frida, with an exclusive and close-up perspective. This was not granted to many, he could spontaneously grasp the expressive nuances of his friend.

She has remained so attached to her life that people may think Frida has never really left this earth, every time they come into contact with her work.

Frida was “A bomb wrapped in silk ribbons,” called her André Breton. She was rebellious in every gesture, subversive in every thought, and convulsively beautiful. Frida, with a deep voice and a disruptive laugh, with piercing eyes that have never closed and have remained fixed on us who look at her in self-portraits.

Diego Rivera was 36 years old and Frida Kahlo was only 15, when they first met while he worked in the Bolivar amphitheater. Of that first encounter with Frida, Diego recalls: «…she had a dignity and a self-confidence that was completely unusual and in her eyes, a strange fire shone».

Frida had her spine broken in three, two ribs, her shoulder, and left leg shattered… excessive and indecent devastation. In spite of everything, Frida grabbed life and kept it inside.

Frida’s sensuality is legendary in a thousand testimonies of men and women, a sensuality impulsive and never studied. Her sunny irony fascinated those who frequented her. An irony that could be caustic, sometimes as ruthless as the Mexican nature. Frida did not want to live, but lived in spite of fate, with the daily consciousness of being consumed quickly, like a blaze that burns brighter than the slow embers.

And yet everything was so intense and so convoluted! We took ourselves inside a new world, a new concept of society, a different way of conceiving politics! Art was politics! Muralists fought against the concept of work to be relegated to private collections or museums. They painted the walls of public buildings so that everyone could enjoy them. I, I don’t know. I paint myself, my pain. I fight and defeat the Pelona every day, every hour, every moment. 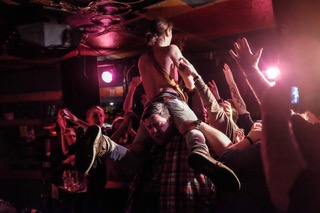