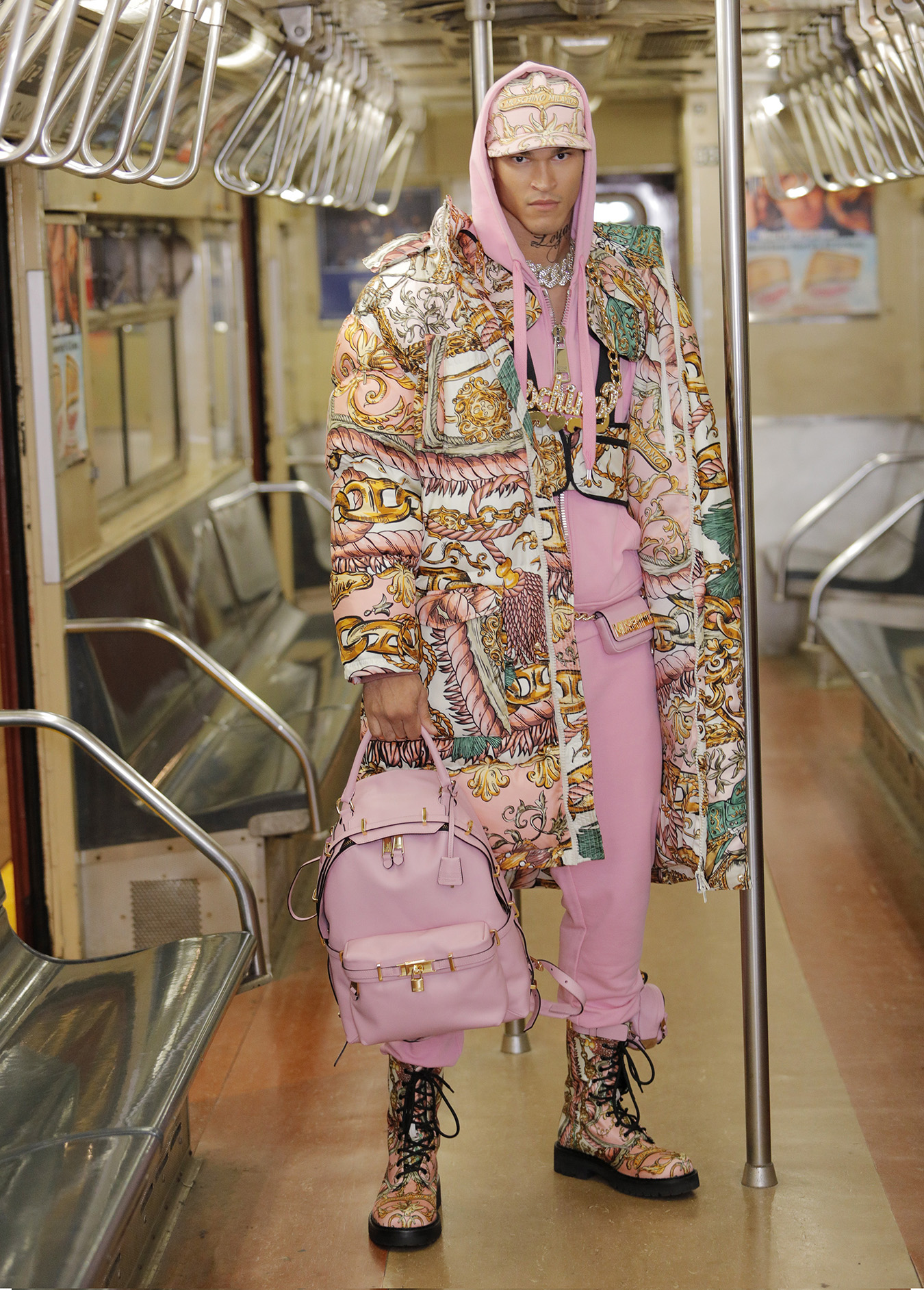 Street meets couture It is in the sign of syncretism between high fashion and fabulous ghetto looks that Moschino by Jeremy Scott debuts on the catwalk in New York.

After the Cinecittà en plein of January 2019 in tribute to Fellini’s visionary cinema, the location is still one that is not easily forgotten: that genius of Scott, for the brand’s first time in the Big Apple, has chosen New York Brooklyn Transit Museum, where a few days ago, as in a subway car, both the women’s pre-collection and the irreverent proposals dedicated to him paraded, in full osmosis with the wardrobe for the Moschino girls.

Trompe l’oeil zippers and maxi bags in the shape of a 90s stereo but also many fanciful accessories accompany the co-and more iconoclastic outfits of the American designer that some define the reincarnation of the transgressive and exhilarating Franco Moschino.

Black culture is intertwined with the haughty and classy style of the young ladies of Park Avenue, played down in a succession of anti-sweat but very tailored styles.

The nail, another iconic element of Moschino’s iconography, acquires a new grit thanks to precious workings such as cobwebs of golden chains embroidered on the skin and showy metalwork very rock but also a bit Toy Boy because Jeremy Scott looks at the hard aesthetics of the leather bar where gay pros of the ‘clone generation’ gathered in the late 80s in the infamous clubs created by the butchers of the Meat Packing district.

Everything is magnified, exasperated, for a blaring mood that is never taken seriously in harmony with the weltanschauung of this irreverent brand that has given so much luster to the rise of Made in Italy.

Rap music and R’n’B, along with the deafening noises of New York subways, mark the rhythm of the lives of those who have chosen to live in the city that never sleeps.

While the vamp jewel fourreau give a new look to the bewitching outfits designed for Cher by Bob Mackie, Elton John’s costume designer before Gianni Versace, the body-conscious tailcoats from rebellious baronet and the bomber wink at Ray Petri’s Buffalo Style with lots of golden chains of order, including cargo pants, color block anoraks and comfortable full-color suits turned in feminine tones.

The stereo prints are reminiscent of a more analogical era, when, in the summer heat, New Yorkers could sit on the entrance steps and listen to the songs of past summers, as in Spike Lee’s films, in the Harlem of the 90s.

Cult details: the giant “Bic” style lighters suggest the shapes of the evening bags (large enough to contain not only a pack of cigarettes but an entire carton), while the tweed flirts with denim, the grisaille becomes sporty chic and workwear outfits become hyper glamorous to the delight of members of the Moschino Community.

It is the energy of Manhattan but also of the underground scene that brings together boys and girls ready to mix and have fun in the asphalt jungle with provocative irony and trash couture made artfully for épater les bourgeois. Next stop: Moschino street. Stay tuned.