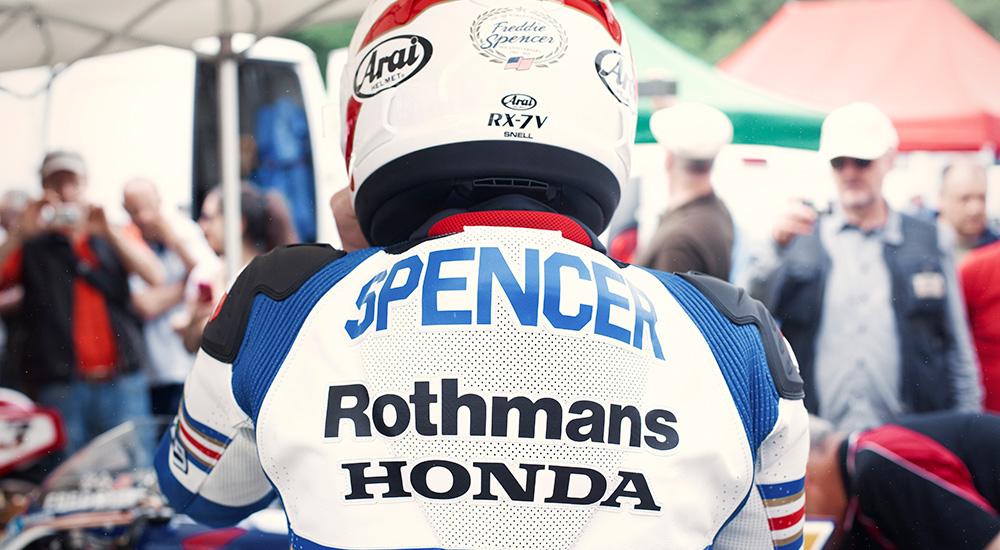 This year in May at Riccardo Paletti speedway in Varano de’ Melegari the 16th edition of ASI Motoshow took place, a show organized by Automotoclub Storico Italiano. This is a Moto Show dedicated exclusively to classic motorcycles, the biggest and most important in Europe, which gathered thousands enthusiasts around the racetrack, in the paddock and on the speedway’s stands to witness first-hand the magnificent show offered by the 751 motorbikes, divided into nineteen heats, according to their date of construction. As usual capable of grabbing the fans’ attention, world champions like Manuel Poggiali, Freddie Spencer, Loris Capirossi, Giacomo Agostini, record-breaking winner of fifteen World Championship titles, to date unparalleled in the history of motorcycling, took part in the event. All of them, both before and after the race, plunged into the crowds for pics and autographs.
The first lap, not without emotions, was devoted to Roberto Loi (ASI president), MP Giuseppe Romanini and Varano’s major Giuseppe Restiani, accompanied by Palmino Poli, President of Commissione Manifestazioni Moto, and Ariel Atzori, ASI’s vice-president, the true souls of the organization. Immediately after the inauguration, all the participants’ motorbikes crowded the tarmac for the first round of laps.
MV Agusta parades, commemorating Ubaldo Elli, and Motobi, commemorating Primo Zanzani, were spectacular. The initiative ‘100×50’, which paraded hundred mopeds simultaneously, was fun and unique. In addition the historical aircrafts of HAG (Historical Aircraft Group) flew acrobatically, at times at low altitude, over the race track.
The laps were followed by the Cagiva parade, then came the turn of the “Eternal Rivals”, whereby Harley Davidson and Indian, Vespa and Lambretta, BMW and Honda, Automoto Triciclo and Triciclo Perfecta engaged in a thrilling scrimmage.
After the race, champions like Giacomo Agostini (on the speedway with Yamaha TZ750), Freddie Spencer (with Honda NSRV 500 2T), Manuel Poggiali, Loris Capirossi, Pierpaolo Bianchi (with Cadalora’s GP Honda), Pietro Giugler, Carlos Lavado and Piefrancesco Chili (to mention just a few) encountered the crowd of enthusiasts behind the central straight, in the paddock area.
This area hosted several legendary bikes, like the then pioneering Automoto Tricycle 300 and Perfecta Turismo 310, both dating back to 1898, which were the most ancient specimen of the show.
Next, the traditional Great Champions Parade hit the race track: forty world champions – in most cases – on the bike with which they won, once again made the day of ASI Motoshow’s audience, which crowded the bleachers watching their heroes lapping the race track and commemorating the feats and victories of their formidable careers.
Robert Pirsig, author of “Zen and the art of motorbike maintenance” (autobiography of a realistic and metaphoric motorcycle journey across the United States, Ed.) points out the difference between a motorbike and a car: «In a car you sits inside a cabin […] you are a passive onlooker of a landscape going by inside a boring frame. On a bike, there are no such frames. You are really in contact with everything. You are no longer an onlooker, you are within the scene and the feeling is gripping». Motorbikes are just like that: they grant you the freedom of a matchless style in motion. A relationship between man and machine consisting of passion, respect and a good dose of madness: aren’t these the main ingredients of the most enduring stories?