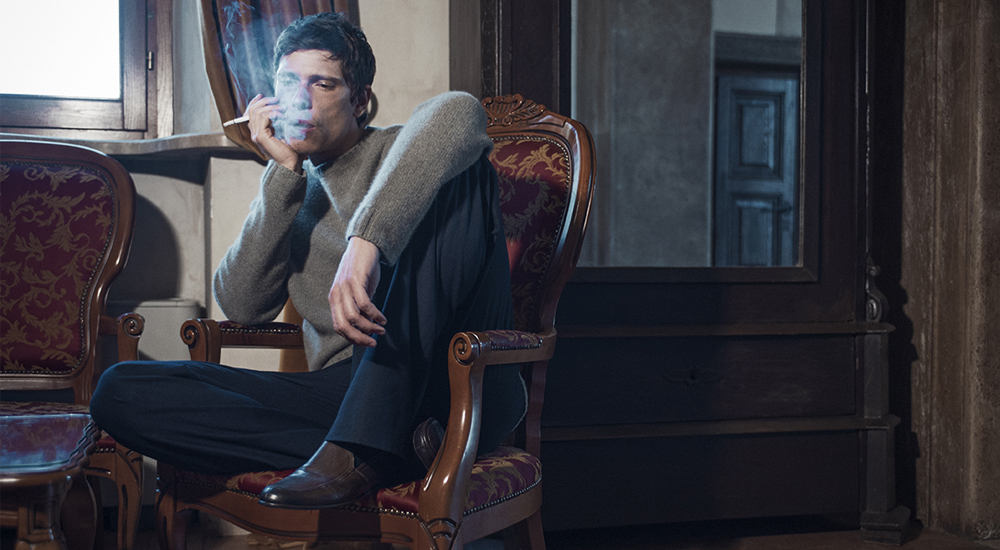 Matteo Martari is the essence of friendly reserve, his penetrating eyes a striking feature of his slender model’s body. After giving up modelling five years ago to pursue an acting career, Matteo is high on life and passionate about his work in the world of stage and screen, ready to spark emotional fuses, or, in his own words, “to communicate with people in a creative way”. He sums up his previous life as a model by saying: “The great thing about fashion was the travelling; I learned three foreign languages and visited places I would never have seen otherwise”. After making a splash in a couple of successful fiction series – in particular as Giovanni Buitoni in ‘Luisa Spagnoli’ (2016), and in ‘The Complexity of Happiness’ (2015), the movie directed by Gianni Zanasi – Matteo has just wrapped the final take of his latest cinematic adventure “2night” (scheduled for release in October) directed by Ivan Silvistrini, earning him the distinction of being one of the most promising actors to hit the Italian and international film scene. Man in Town met Matteo on a break between projects to chat about life and what he loves most.

Can you give our readers some deeper insights into what your latest film is about?

‘2night’ is the story of life, of chance encounters, and of choices. It’s a shoestring budget production with lofty ambitions. The film was shot over five consecutive nights and was very demanding as it’s pretty hard to stay focused during the dark hours. I’m no stranger to night work, though, as I used to work in a bakery before modelling.

What does the future have in store?

We’ll have to wait and see. I’m crazy about both the cinema and the theatre, which I’ve done plenty of in the past, but the fiction series was magic, not to mention the web series “Under” directed by Ivan Silvistrini, which I’ve done one episode of; I believe digital streaming is the future. I’d love to work with Italian directors like Gabriele Mainetti and Fabio Mollo, who’ve won awards for their amazing productions, while my biggest dream is to get an offer from Danish filmmaker Thomas Vinterberg of the Dogma school. But what counts the most, for me, is to be able to create a project that people like and have fun doing it.

What are your boy passions?

I’ve been a biker since I was 14. I love endurance sports and as soon as I can I’m going to open my own rally stable. For me, vintage cars are the true style icons.

Speaking of style, what does your ideal wardrobe wear?

Since working as a model ‘trendy’ has lost its appeal for me. I’m more into a style that slants to the technical and wearable. But I’m mad about hats and have around 200 in my collection, including a few Borsalinos that I picked up on my travels around the world, many in Paris. I admire men who have a defined concept of elegance and know how to carry it off. For me, the look always defines the character: playing Giovanni Buitoni in ‘Luisa Spagnoli’ taught me that the elegance of the past was born of grooming rites that are no longer possible today. The imperative of practicality has taken sway, stepping up the frenzied pace of life almost to excess.