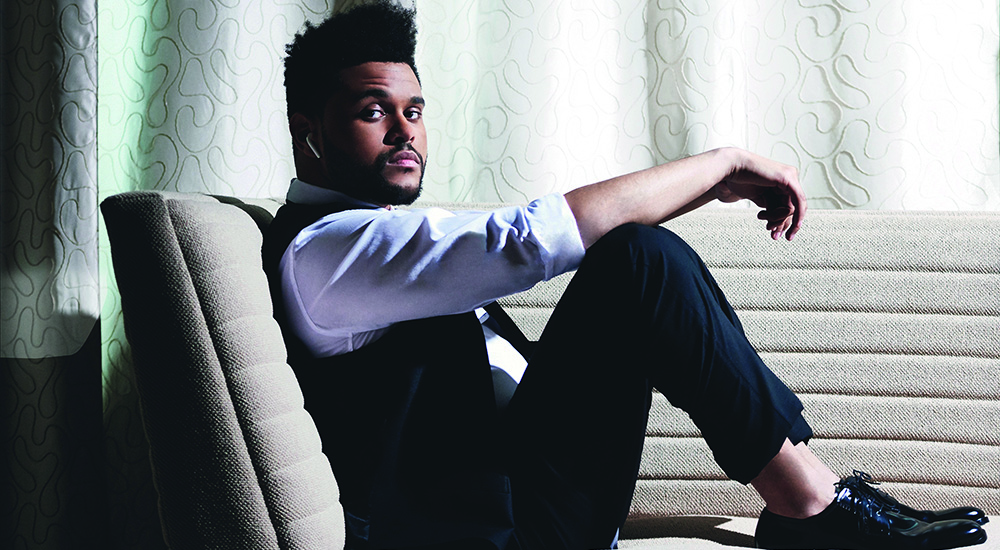 He is no-doubt the musician of the moment, with an album on top of the charts and a solid sixteen million followers on Instagram, plus an average of 800,000 likes per post. His latest album, Starboy, which includes collaborations with Lana Del Rey, Kendrick Lamar, Pharell Williams, Future and Daft Punk, was released in November, 2016 by Republic Records, debuting first on the Billboard 200, and selling 348,000 copies in the first week alone. He achieved Gold Record status in Australia, Brazil, Italy and United Kingdom and Platinum status in Canada, Denmark, France and the United States. Yet, Abel Tesfaye, The Weeknd’s given name, remained in the shadows for some time. In 2011, he launched the album Trilogy, yet audiences didn’t know what he looked like. His velvety, slightly falsetto voice, reminiscent of Michael Jackson’s, garnered world recognition because, as he himself stated “I feel like everything we do comes down to how it appears. Even no branding is still a form of branding. For example, if you have no face or image of yourself as an artist, it puts the music first. That was branding. I have always been very camera shy. People like hot girls, so I put my music to hot girls and it just became a trend. The whole ‘enigmatic artist’ thing, I just ran with it”.
After anonymity, the rest is history. He decided to reveal his image after allowing his music, a mix of R&B, rap and a hint of pop, speak for itself, which it does- about sensitive topics like love and sex, drugs and sorrow. Magazines are mad about not only his cheeky lyrics, but also his hairdo: sculptural dreadlocks (loosely inspired by Basquiat), which he recently relinquished to embrace a cleaner image, which speaks to his musical evolution, and to allow him to go to certain clubs without being recognized. Today, the shy boy with Ethiopian roots who grew up in the suburbs of Toronto almost seems like a legend. He stated frankly: “Let’s be honest, Canada wasn’t ever cool. I went from starin’ at the same four walls for 21 years, to seein’ the whole world in just twelve months”. At 17, he left high school and moved into a studio apartment in downtown Toronto with his best friends, La Mar Taylor (his Creative Director) and Hyghly Alleyne (a collaborator and his acclaimed Music Video Director). They paid the rent mostly with welfare money, sometimes stole food to keep from starving and used some dubious substances, all while the future star and his friends were working on his R&B music mix, which would later become Trilogy: ‘House of Balloons’, ‘Thursday’, and ‘Echoes of Silence’. Even before The Weeknd’s sound and lyrics were praised by his Canadian colleague Drake, his decision to upload his music on YouTube under his alias helped earn him an unprecedented cyber following. And much more. Besides his notoriety, mainly ascribed to the digital world (“the Internet, man, is a beautiful thing,” confides Abel), the fashion industry also took notice of the musical phenomenon, who saw the artist’s potential as digital taste maker with a vast public: his music is acclaimed by both those who love trap, and by those who listen to pop, even though he doesn’t consider himself to a fashion icon, saying: “my closet is like Bart Simpson’s.” Since 2016 he has been a Global Brand Ambassador and Creative Collaborator for Puma, and for Autumn/Winter 2017, he designed the PUMA x XO Parallel sneakers and the Deluxe Denim capsule consisting of bomber jackets, t-shirts and jeans, which he wore on stage at the beginning of the ‘Starboy’ world tour. One item he can’t go without, according to Tesfaye? “For my generation, the bomber jacket has replaced the suit jacket. It’s a piece that men wear every day, and it’s something that I would wear for any occasion, whether it’s on the street or going to an awards ceremony”. In March, 2017 he collaborated with H&M on a capsule collection, and in 2015 he collaborated with Alexander Wang. The singer even has his own line called “XO.” XO is also the slogan he uses to communicate with his fans, and what he dubs his Crew. Some fans say that “XO” as in The Weeknd’s “XO Crew,” simply means kisses and hugs, while others say that the letters stand for Ecstasy and Oxycodone. Regardless, he and his crew regularly use the acronym to sign their social media posts. Could it be a global message of love? Who knows? Certainly, The Weeknd knows about love, considering the relationship he has with his fans, not to mention his love affairs with the most beautiful women on earth, from top model Bella Hadid to the recent romantic liaison with singer Selena Gomez, their union celebrated as pure social media magic, given Selena’s status as an Instagram queen with 132 million followers. A very short love story, indeed they have already split, both have already returned to their exes (Gomez with Justin Bieber), although rumours have it that Abel is still in love with Bella. Last but not least, the restless and talented artist also has a passion for the cinema. He contributed to the soundtrack of “Fifty Shades of Grey” with the tune ‘Earned it,’ which won a Grammy and a nomination as Best Original Song at the 2016 Oscars. This normal-looking guy is truly a treasure trove of surprises, citing The Joker (as interpreted by Heath Ledger) among his film favourite characters. “I love villains– they’re the best characters in movies, right? The Joker is my favourite villain of all time: You don’t know his past, you just know what his plans are”. Yet, foretelling The Weeknd’s future plans is no easy task, all we can do is wait for his next chameleonic evolution, whether it be look-wise or music-wise, as it will certainly be proclaimed, and promoted first and foremost, on digital networks.