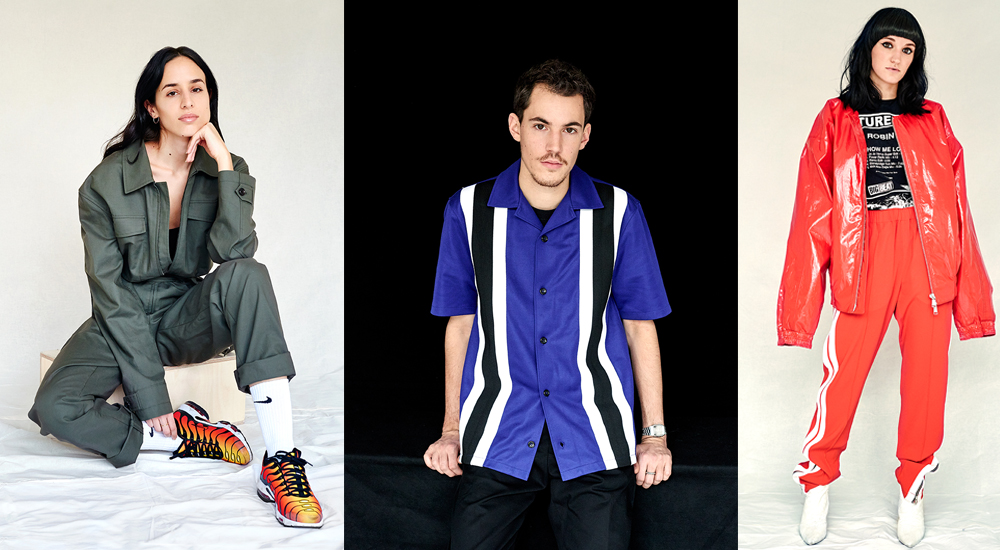 The Paris club music scene quietened down a er the French Touch era in the 90s, but now, with the arrival of a dynamic new generation of French DJs and producers, the revival of Gallic club culture is well underway. Filling up dance oors, taking over the airwaves, touring the world and releasing records on international labels, this new guard of music makers is bringing an eclectic electro sound-a genre – defying combination including techno, house and hip hop with UK and African in uences – to the wider worldwide stage. We met ten of the most in uential gures on the scene to nd out more about the return of Paris to the contemporary music map.
Here is the second part: Betty, Simo Cell, Sam Tiba e Miley Serious.

As one of the most talented DJs on the French club music circuit, Betty Bensimon has a taste for unexpected blends that get the crowds moving. She has created a community around her Bonus Stage parties in both Paris and London, and is a member of the House of Mizrahi, a crew that is part of the vogueing scene. She also hosts a radio show on Rinse France, has featured on the global online music broadcasting platform Boiler Room (twice) and plays throughout France and Europe. French DJ and producer Simo Cell creates an eclectic sound combining techno, UK bass and electro. The first foreign artist to be released on UK record label Livity Sound (plus he has a new EP out with them now), his reach goes beyond his Paris base—indeed, he embarks on an Asian tour in May. A member of the French electronic music group Club Cheval, DJ and producer Sam Tiba is also a solo artist in his own right, injecting a large dose of hip-hop into his explorative sets. He’s currently working on his first album, which will be released early 2018. DJ Miley Serious is a member of TGAF, an all-female music collective that hosts a radio show on Rinse France and that has guest DJed on BBC Radio 1. Miley blends electro, house and techno to create a high energy sound and has just launched her own label, 99cts Records

How would you describe your style?
B: I like music that can be played in clubs and that makes people dance. I like to wear red, leather and t-shirts from my favourite record labels.
S: My style is very simple: trainers, jeans, wool sweaters, a cap. And the essential item: slightly oversized plain black or white t-shirts.
M: I love black, but I also love romanticism. So, I could describe my clothes and my music style like that. When I’m playing, I like to wear nice shoes-I pay a lot of attention to my outfits and don’t try to hide that.

Who and what influence you and your music?
B: At the moment, the clothing style of the women in The Sopranos and the music played at weddings and Bar Mitzvahs.
S: Nowadays, it’s Paul Pogba and my mum.
S.T.: A bit of everything: Paris, my musician friends, the films that I watch.
M: My influences are quite wide-ranging but come together. I’m a rummager-that’s part of my job. I’m passionate about everyday objects, fanzines, NYC, Manchester and counter-cultures. As for who inspires me-the list would be too long.

What role does social media play in your work?
B: Social media is an important tool for promotion. Using it is work rather than pleasure for me.
S: I have a tendency to be super addicted to social media. The further I am away from it, the better I feel. I don’t even have a smartphone.
S.T.: A bit less than before. I feel like self-promotion has become very boring over the years and that’s maybe the only thing I dislike about social media.
M: Social media is important but it brings me down. I hate that interest depends on the image used or the time of day that you post.

Is Paris back on the music map? What’s your role in the Paris music scene?
B: I’m a DJ: my aim is to make people dance in clubs, to allow people to discover music thanks to my monthly radio show on Rinse France and to bring a community together around dance music in my city by KIM LAIDLAW club nights.
S: There is a lot of competitiveness at the moment in Paris and lots of talented artists are emerging. There is a dialogue between the generations: the older people on the scene are pretty receptive to the work of the younger people and vice versa. We are better represented on the international scene and we all want to collaborate and grow together. There’s not a style of music that belongs to this new, emerging scene: everyone comes from a different world and brings their own touch.
S.T.: Paris never disappeared. For me, this city is always bubbling up-there is always something happening and the scene is just getting bigger. Maybe I’m between two generations, the old and the new, and sometimes I try to bridge that. The arrival of radio stations like Hotel Radio and Rinse France has allowed a really cool scene to emerge-the future of Parisian music is really exciting!
M: I don’t know if Paris is back but I admire what people are trying to do here right now. My role as a DJ or with my label is to be the link between the studio and the dance floor and for me that has enormous importance.

What do you wear when you’re performing?
S.T.: I wear the same thing on stage that I wear in my everyday life: a mix between basic and vintage. Like 95% of Parisians today, in a way.