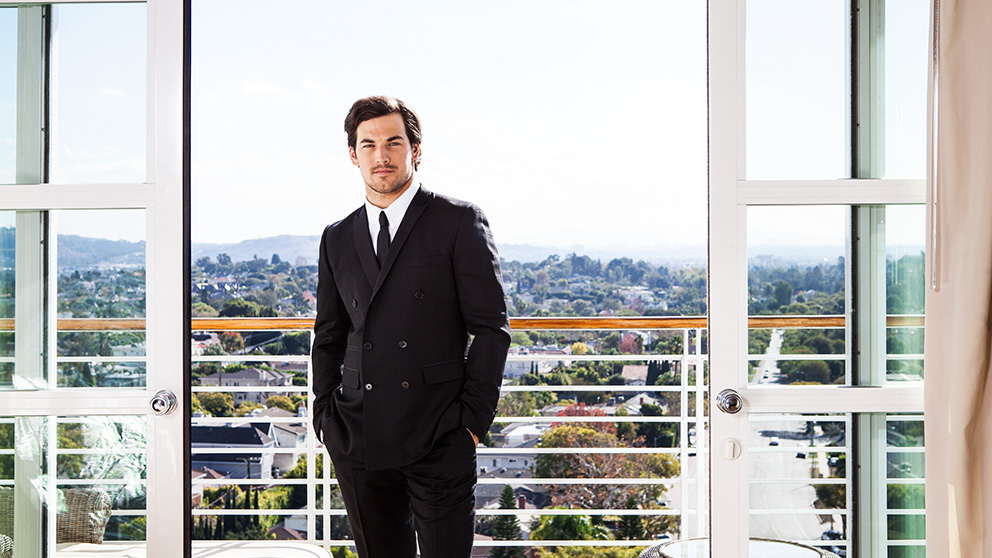 He’s handsome, brunet and he’s a doctor. He seems the dream of all the Italian mums, who would see their daughters with good marriage prospects. Giacomo Gianniotti is the new star of the Grey’s Anatomy’s cast. He is Italian, Roman actually, on his father’s side, and nationalized Canadian.  The young actor- he was born in 1989- has both tricolor roots and his heart, so much that he was present in Amatrice to help the earthquake-affected population. MANINTOWN met him in Los Angeles to reveal his dreams, current and future projects, passions and his love for Italy.

When did you start acting? and when did you train as an actor?
I started acting when I was 10 years old in a film called “La Bomba” of Giulia Base. It was shot in Cinecittà and starred Alessandro and Vittorio Gassman. I then studied drama in High School, after 2 years of returning to Rome I went back to Canada to study theatre at Humber College’s Theatre program for 3 years in Toronto. I then studied film acting at the Canadian Film Centre for 1 year and then have been working non stop. I am now currently enrolled in a Directing/Filmmaking Program here in Los Angeles.

When and why did you move to Toronto, coming back and forth from Rome?
My father was Roman, my Mother was Canadian. So my whole Italian family is still in Rome and I visit when I can.

What do you miss of Rome and Italy in general?
The culture, the piazza, the smells good and bad. The art, my god, the art. The fashion. Risotto with crema di scampi.

You also played in theatre…how is to switch from tv and cinema. How was important that experience?
Theatre training is essential. It taught me to use my body and voice to their maximum potential. I learned a lot about myself and what I am capable of.

Which are your favourite film directors more inspiring for you and those you will dream to work with?
Tornatore. Spielberg. Scorsese. Fellini. De Sica. Paolo Sorrentino. Stefano Sollima.

How did it happen your entry in Grey’s Anatomy and did you expect such a big success?
I sent an audition tape from Canada. Months later I went to Los Angeles, was asked to do one more audition and then I got it. It was only a small part at first. Then it turned into something bigger. I was very surprised.

Medicine is a recurring theme in your career….does It come natural to play in this kind of series?
Haha. Yes. I don’t know why, it was my first on screen job in Rome and it is my current job in Los Angeles

How do you see your role evolving in Grey’s Anatomy?  How are all the characters in real life?
I know nothing. It changes week to week. I hope that Andrew finds peace, some real friends and maybe through some life changing experience understand what kind of a doctor he is meant to be.

Which other passions you have and your places to recharge?
Music, music, music. I sing and play guitar and write music. Mostly for myself and friends but I hope to share soon something with the world when I have time. Photography, cooking and riding my motorcycle are some other passions of mine. My place to recharge is Italy. Il giardino degli aranci. The most magical place on earth.

You are also a volunteer and you have been to Amatrice to be of support. How was that experience? Your first reaction when you arrived?
I went with an organization I work with, All Hands. It was tough, but I learned a lot about the Protezione Civile and their role in weather related crisis. They were very organized and had everything under control. So we found out very quickly our help, gladly, was not needed. But it felt good to go home and be there and talk to families who had been affected and hear their stories and watch communities of people gather together to help. Italy is very corrupt at the moment and is in a time of great crisis. I was happy to see that at least for the most part corruption was not stopping the relief effort to help people.

When you travel, what cannot be missing in your bag/suitcase?
Guitar. A nice blue suit, my wallet chain.

The last book or song that was inspiring you and make you think.
Giardini Di Marzo to this day speaks to me in ways no other songs have. Lucio Battisti was a great loss to me.

Your next projects and dreams?
I had some opportunities to work in Video Games for MOCAP, and really loved that work, I hope to do more of that. I want to direct, I want to write scripts, I want to write music. And I would love to do some work In Italy. In Italian.