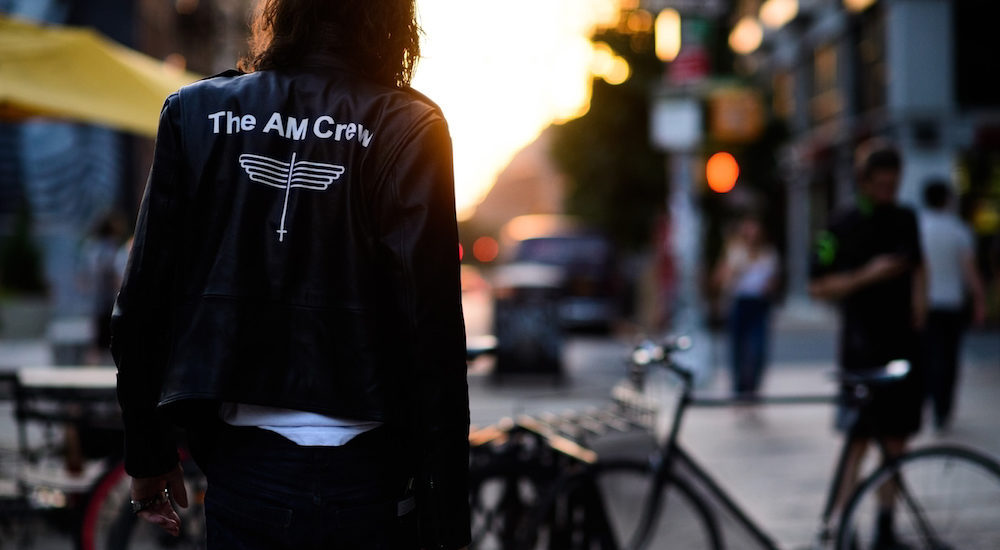 The AM CREW collaborates with MANINTOWN for the second edition of a successful collaboration presented during Milan Fashion Week in January. The second collection, called “Poison City”, and created by Vlatko Dukic e Signe Christoffen, takes inspiration from the city of Hong Kong, where the brand is based, interpreted as the city of poison in the ‘80s, when corruption and drugs arose, like in the sci-fi movie Blade Runner, in a confused environment where rock’ n’ roll music was a form of rebellion. The collection is also an homage Justin Gossman, super model and musician, characterized by a unique sense of style and charismatic personality. The AM CREW man is a modern Lord Byron, with a flamboyant aesthetic remixed in a contemporary way, with subtle grunge and Victorian accents. He is a night lover- the central element of the brand’s creation- who strolls around the Asian city, between humidity and shadows, but always with style. A roster of intriguing people will be the main characters of the new advertising campaign: the super models Niall Underwood, Ivan Claudiu and Sasha Panika.

The top 5 things you should know about JUSTIN GOSSMAN

HIS UNIQUE SENSE OF STYLE
Justin Gossman, can easily be mistaken for a rock star.  He has a natural love for skinny leather pants and vintage suede jackets with a 70’s vintage allure.  In reality, however, he can transforms himself on runways and for editorial stories.  He’s kept himself busy while working for brands such as Gucci, Lanvin, John Varvatos, Rick Owens and Raf Simons, both on the runway and for their ad campaigns.

A DEEP PASSION FOR MUSIC
From a very young age, he began dancing, he learned piano, and can play the harmonica and the guitar.  He is also the lead singer in a rock band called “The Toy Gun.”  They are set to launch their first release in coming months.  Justin loves rock ‘n’ roll especially the song “Devils Sympathy” by the Rolling Stones.  He takes great inspiration from Mick Jagger, David Bowie, Brian Jones, Keith Richards, Jim Morrison, Syd Barrett, Patti Smith, Bob Dylan among other music legends.  The Toy Guns has a rock ‘n’ roll soul with a modern twist.

POSITIVE ATTITUDE
When off stage or not working, Justin loves goofing around with his colleges and friends.  There is never a dull moment with Justin, he loves enjoying life, spreading love, and he knows how to cheer up people around him, always providing entertainment.

SPORTS?  YES PLEASE
Justin used to skate board and he still loves surfing whenever he gets the chance.

INTERNATIONAL MANGA ICON
Justin’s strong resemblance with famous Japanese manga series Black Butler lead character called Sebastian is not just a co-in coincidence.  It is very hard to spot the difference, so Sebastian must really be his fictional doppelgänger.