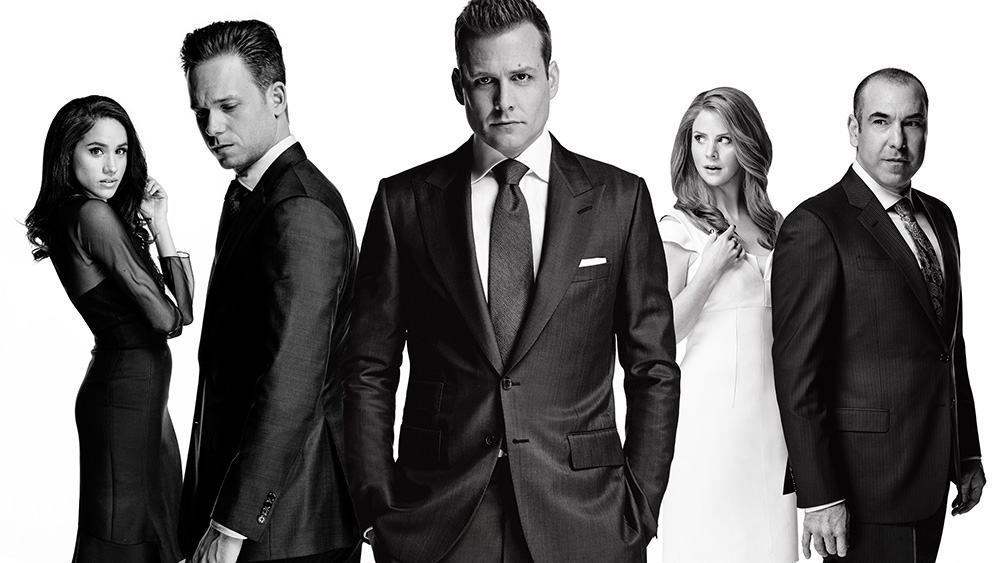 By now TV series are an indisputable part of our lives. We come home from work, lie on the couch, unplug, tune in and away we go. Before the dawn of WebTV, there would be a weekly rendezvous at our friend’s house, the one with the satellite dish. These days, especially since the arrival of Netflix, we can happily watch our favourite show whenever we want. Let’s see which series will keep us glued to the screen in the coming months.

Speaking of Netflix, it’s impossible not to highlight the success of legal drama Suits, now up to its sixth season in Italy (the seventh is under work in The US). A show with a strong focus on style, as well as the usual relationship twists and disputes, all within a law firm in New York. Already the title of the show gives away one of the passions of the main character: the classic business suit, impeccably styled by lawyer Harvey Specter (Gabriel Macht), who never appears without his white pocket square. Another reason to watch the show is Meghan Markle. The future princess (in real life, the girlfriend of Prince Harry) plays Rachel Elizabeth Zane, an assistant at Pearson & Hardman, the law firm around which the story revolves. About the new episodes coming up, Gabriel Macht says “the story is taking a very real turn, viewers won’t be seeing “super hero” lawyers anymore but normal people with their same problems, facing real issues.”

Another cult series to watch (or rewatch, in case you missed the first two seasons) is Twin Peaks. Exclusive to Sky Atlantic, the third chapter from the genius mind of David Lynch, carries on 25 years after the second season’s conclusion. Amongst the 217 cast members, we find old and new faces (like Monica Bellucci) and the always elegant special agent Dale Cooper, with his unmistakable dark suit and white shirt. After unmasking Laura Palmer’s killer, almost 30 years after, the agent will have to confront new supernatural phenomena, as they return to haunt the forests surrounding Twin Peaks. We won’t say anymore, knowing how much fans hate spoilers and knowing Lynch, there will be plenty of new dramatic twists. And then some: “I couldn’t help but putting out there, Twin Peaks was living in my subconscious. I have no intention to end it here” shares the director. Should we expect a fourth season?

Also signed Sky is the series that enchanted millions of Italian fans, Game of Thrones. The on screen adaptation of George R.R. Martin’s novels Songs of Ice and Fire has reached its seventh season, which we’ll be able to watch in July, at the same time as American audiences. These seven new episodes will prelude to the grand finale, expected for 2018, when the wars to conquer the Throne of Westeros will end.

As always the backdrops will be incredibly majestic: the filming took place during the cold seasons between Northern Ireland, Spain and Iceland. We can say it now, winter is definitely upon us. And so says Jon Snow, played by Kit Harrington, “this seventh season will be the the darkest and bleakest for the characters, before we reach the happy ending, if we can call it that, of the final season”.

One series (this one on Netflix) that started off as a slow burner and has slowly earned a huge following is Stranger Things. At first viewing it appears as a show catering to young adults, only because the characters are young. But the horror vibes, intense drama and setting – a fictional town in Indiana in the 80’s – make for mature viewing, not too different from the above mentioned Twin Peaks, starting from the very eerie soundtrack. The second season is set to air on Halloween, so there’s still time to put the popcorn in the microwave and grab your spot in the couch. Meanwhile, to get into the mood you can put on your check flannel shirts, the characters favourite item of clothing. The detective boys return to further investigations, because as the creators Matt and Ross Duffer assure “we have only just opened the curtains on the ‘Upside Down’ place and now we want to explore it”. Fans are advised, new mysteries and new creatures lie waiting.

Lovers of political and power intrigues must not miss House of Cards. Also by Sky Atlantic this started in end of May, so you’re still in time to catch it on NowTV, Sky’s excellent WebTV. The new 13 episodes from the 5th season, take off from where we left at the end of last year when the president of the USA, Frank Underwood (Kevin Spacey) and the First Lady Claire had said farewell to the public with the lines: “we don’t suffer terror, we create terror”. In these new episodes, Underwood will exploit the fear of his citizens to obtain more votes. In a recent interview Spacey declared, “what’s interesting is that those watching the show a few years ago were thinking ‘hell, this is crazy. It could never happen”. And 18 months later they were thinking “wait a minute, the events in House of Cards could really happen. Or they already are.’ I think we’re more terrified than ever.”

Another hugely awaited series is Mindhunters, on Netflix starting October. We couldn’t but have great expectations coming from the director of House of Cards, Seven and Zodiac! The show is set in 1979 and centres on agent Bill Tench (Holt McCallany) who, together with partner Holden Ford (Jonathan Groff) tries to dig deep in the mind of serial killers to solve cases. A sort of cauldron within which they blended Lie to Me, True Detective and Criminal Minds, resulting in what experts are calling a fascinating voyage in the mind of assassins. It’s bound to be a huge success and a second season has already been signed, before the first one has officially aired.