Sergio Rossi, the founding entrepreneur of the eponymous brand, died at the age of 84 and had contracted the coronavirus. A great entrepreneur and shoe maker from the Romagna district who gave his name to one of the best known brands of made in Italy.

Its history cannot be separated from that of San Mauro Pascoli, a small town in Emilia Romagna known for the birth of Giovanni Pascoli, poet and singer of nature and everyday life. The post-war years saw the transformation of the area with its footwear vocation.

The success of the cobblers, who roamed the villages and farms, led to the change and progressive abandonment of the more traditional agriculture and livestock activities. Thanks to him, the village was transformed into a large artisan shop specializing in the production of sandals, which were then sold in small shops on the Riviera.

From this first artisan activity a flourishing industry was born and developed, which specializes in women’s high fashion footwear. Together with the shoe factories, small companies specializing in the manufacture of semi-finished products – soles, heels and bottoms – and workshops for cutting uppers by hand and machine are born and thrive in the same district of San Mauro Pascoli.

A true industrial craftsmanship that has been able to establish itself on the global market, focusing on the quality of materials and manufacturing as well as on the originality of the design. So in 1958 in San Mauro Pascoli the Mir Mar was built, the first industrial-sized shoe factory, while the nearby seaside towns such as Rimini are in full swing, then celebrated by Federico Fellini in his Amarcord.

From this cultural closeness with the great director a curious legend was born: in the masterpiece “La Dolce Vita” (1960) the décolleté worn by Anita Ekberg seem to be those of Sergio Rossi, who in those years built his fortune by focusing on footwear female.

This is the context from which the adventure of Sergio Rossi begins, who follows in the footsteps of his father, a skilled shoemaker, from whom he resumed his activity in 1956, creating the first handmade sandals.

Riccardo Sciutto, CEO of the Sergio Rossi Group, was inspired by this story of authenticity, named by Andrea Bonomi, founder and president of Investindustrial, an independent financial group that acquires 100% of the company from the Kering Group.

Sergio Rossi is back in Italian hands and thanks to Sciutto’s vision, the path to relaunching the brand begins. 2016 with the sr1 collection, inspired by the square-tipped model of the early nineties represents the new beginning, in the sign of the brand’s most genuine aesthetics. A path in which the contemporary reinterpretation of one’s legacy is central.

Sergio Rossi had declared in 1988: Since the beginning of our industrial activity we have concentrated all efforts in the search for form, an element that is of primary importance in the shoe … After the shape, the focus is on the other two elements that complete the structure of a successful shoe: style and quality.

Once the three ingredients are perfectly calibrated, success simply becomes a logical consequence ”. Today, thanks to the “Living Heritage” company museum, it is possible to relive all the salient milestones of Sergio Rossi through a selection of over 300 of the most representative and innovative wooden shapes of the brand.

From the shape of the very first “Opanca” sandal from 1966 to the large plant and low heel shapes of the seventies, to the tapered shapes of the décolleté, to the timeless pump “Godiva”: a significant representation of the history of this extraordinary artist-craftsman of form.

Even before the important photographic campaigns, Sergio Rossi entrusts his image to artists and illustrators who have created recognizable and ironic illustrations and drawings for him. Among the first could not miss the eclectic illustrator and stylist Alberto Lattuada, who with his creations and jokes has animated the world of Italian fashion for over fifty years.

Then it was the turn of Miguel Cruz, who in addition to creating some illustrations to advertise Sergio Rossi in the early 70s, is also a stylist who makes use of Sergio Rossi’s collaboration for the creation of footwear to match the looks and clothes of his collections.

Always designs of great strength and incisiveness are those made by the Swedish Mats Gustafson, a name that has become famous for his important collaborations with Hermès, Dior and Yohji Yamamoto, as well as with magazines of the caliber of Vogue and Harper’s Bazaar. When the brand reaches success, the moment has come to create real advertising campaigns that define the imagination and the Sergio Rossi woman.

To immortalize his shoes to make them style icons are called Italian and international photographers who made the history of photography. We pass from still life images where the product is the protagonist, to those set and more seductive thanks also to the presence of the top model.

The gotha ​​of photography with Helmut Newton in the front row makes Sergio Rossi’s modernist style immortal. With him disappears a piece of history of Made in Italy and a charismatic figure of Italian footwear.

In the last issue we talked about the new project about the Onesoul sneakers by Guardiani, a design trainer that mixes an active spirit with a more formal attitude, that distinguishes itself for its tapered shape, the strap and the contrasting spoiler. An unisex shoe that can be declined in a multitude of ways, it can have different uses and suitable for divers looks. Just like the MANINTOWN man, the essence of this sneaker has many sides: it winks to the new trends, the high-top version with the sock is the perfect example, it maintains a sleek and elegant attitude, making it possible to pair it with a business look or a nightout suit.
The project working on this particular item is developing thanks to the interpretation of it with the video-manifesto (called Onesoul, many personalities , of which we talked about in our site) curated by Senio Zapruder, in which all the different personalities and archetypes of subcultures and Instagram are explained, the very ones who inspired the design of this sneaker, exploring the diversity of characters that create or are the final target of the Onesoul sneaker. The shoes becomes even more viral and a cult object of the web.

Exclusively,  we present the new ONESOUL KNITTED high top ( a preview on the fw18 collection is already available on the Guardiani online store), an design athleisure bootie, unisex following the trend, that is the protagonist of the video that you can watch online on manintown.com. 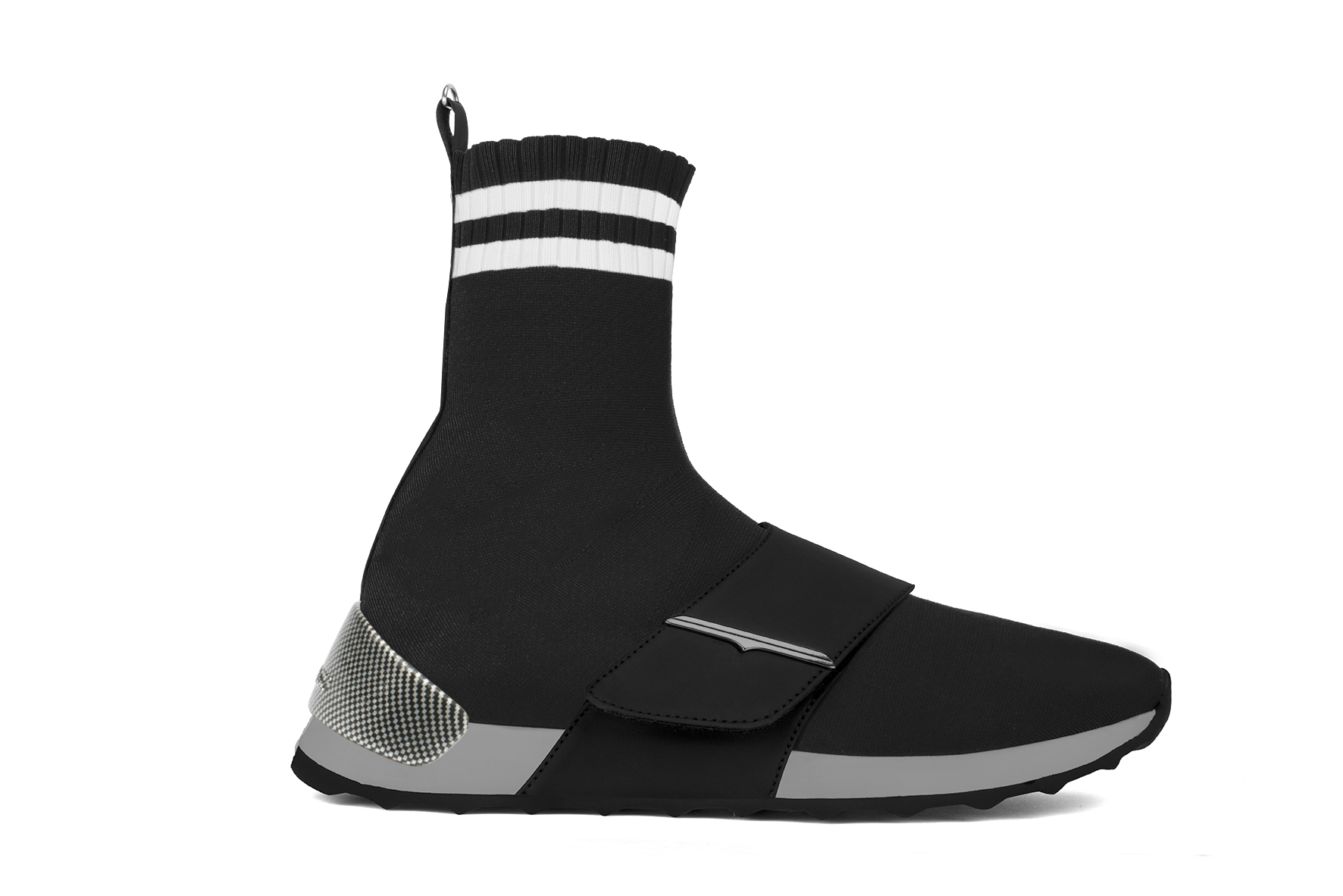 The Onesoul knitted high-top, is a sock sneaker, evolution of the iconic  model of the brand, and it is made for the sneaker addicted, entirely made in stretch knitted tubular fabric, this shoes has the same details of the basic one: the strap in rubberized fabric, metal buckle with the logo and the contrasting spoiler.

The socksneaker Onesoul  is available in two unisex versions: black with red spoiler and green with wooden print spoiler.In the video is really important the genderless topic, that is shown in a more minimalistic way. Two identical figures interchange, at the beginning they look like only one and just after they separate and interact. The alternation of black and white of the Onesoul knitted high-top stole the attention on the scene and catches your eye, thanks to the visual power of its design.

This model, with the preview for the next spring summer 2019 collection, will be exposed at Pitti 94, in the Alberto Guardini stand (Pad. Centrale K18) and in the milanese showroom of the brand, in Palazzo Serbelloni, Corso Venezia 16.