The world of modern and contemporary art and the frenetic – to say the least, bulimic – moving between salons, galleries, vernissages, works, installations and planes with ad hoc destinations such as London, Paris, New York, Los Angeles, Milan, Basel or Miami. A ‘be there’ frame of mind – that of the collectors who frequent them – necessary to see, discover, get to know, desire, but above all to buy and thus ‘have’. Chiara has known that world since she was a child, because she is the daughter of two of the greatest Italian art collectors, an ambitious girl with studies in the English capital and a desire to start her working life in Milan to emancipate herself from that important yet cumbersome family.

To play this character, in Perfetta illusione, director Pappi Corsicato – a storyteller of a carnal and popular Neapolitan character, proudly earthy and peripheral, as well as a former assistant to Pedro Almodóvar – has chosen Carolina Sala, one of the most popular and beloved emerging Italian actresses, a mix between Charlotte Gainsbourg and Emmanuelle Béart in her youth, and the undisputed star of successful films and dramas.
“Without knowing it – she explains when we meet her – she finds herself in a relationship with Tony (Giuseppe Maggio), who would like to become an established artist, in whom she sees a lot of talent. He is married to another woman (Margherita Vicario) and what will actually begin between them”, she adds, “will be more of a triangle of ambition rather than love”.

“It is important to have your own ambition to push yourself to seek more, but you mustn’t exaggerate”

Carolina is also ambitious in her own way, “just enough for a girl born in Vittorio Veneto and brought up in a small village not far away, in Conegliano, among the Prosecco hills”, she says, “with two special parents who left her free In serenity that only certain provinces can give or ensure, teaching her the basic rules, reading many books to her and always be there for support, thus allowing her to follow her desires”. But – above all – reminding her never to stop believing in dreams, also because, some – it seems – can really come true.

Acting for example, the greatest desire that Carolina always had, became true and she had a chance to discover it in depth. For example, in the theatre when she was only 15 years old, training at Lorenzo Da Ponte’s Academy and then, three years later, in other shows that took her to Rome, where director Cinzia Th Torrini wanted her among the young actors in a highly successful RAI series, Pezzi unici, in which she starred alongside Sergio Castellitto. “It is important to have your own ambition to push yourself to seek more, but you mustn’t exaggerate”, she points out.

“After Pezzi unici, I wanted to dedicate myself to university and art, which allows me to appreciate more and more everything I do”

“As an actress, I have many projects in my head that I would like to do, but in life there are other things and what really counts for me is the network of people, friends, affections that one creates. They are my support, my strength, without them I would risk losing myself”. She has an inner force that is not indifferent, which in some ways recalls that shown by the  character she played in Vetro by debutant Domenico Croce, a character for which she received a special mention at the last Bifest in Bari. This film was also about art, as she played a solitary artist, always indoors in her room painting colourful pictures, who discovers that reality is different from what it seems.

Even in her real life, Carolina lives in close contact with that world in addition to the cinema. “I am graduating in Conservation of Cultural Heritage with a specialization in History of Art in Venice, in Cannaregio, where I live when I am not out for work, in a house full of books, polaroids taken during my travels, objects and clothes in a pleasant chaos in which I always find my order”.

“After Pezzi unici, I wanted to dedicate myself to university and art, which allows me to appreciate more and more everything I do, to continue to dedicate myself to something beautiful even when I am not on set, without living in the constant anxiety of the ‘phone call’ to work. If it comes, of course, it’s a pleasure, but in the meantime I also do other things, for example I dedicate myself to my theatre company (the Little Shakespeare Company, ed.)”.

The experience with Corsicato “was a great opportunity, very educational”, “a way to know from the inside the special world of art and those who gravitate around it, especially collectors, a film that shows a lot about the world of art and works of art, which are like people: you have to know how to sell them”. Filming in some of Milan’s most important galleries, “was exciting”, especially the scenes inside the Pirelli Hangar Bicocca where Maurizio Cattelan’s exhibition Breath Ghosts Blind was underway.
Art, but not only art, for the talented and beautiful Carolina, because in the TV film Rita Levi-Montalcini played the famous Nobel Prize-winning neurologist when she was young, “an incredible experience”, she recounts, staring at us with her eyes displaying the most disparate emotions, “because for me, and not only for me, she is an iconic woman, an inspiration, a character who really existed, but in interpreting her I wanted and I was able to put my own touch to it, between written testimonies and imagination, wearing beautiful vintage clothes and wigs that were not always comfortable, but fascinating”.

“I live in absolute normality, the success I have achieved with my work has not changed me, if only financially and in experience”

Completely different is the character of Sofia, an aspiring writer who loses her mind for her professor (Michele Riondino) in the Netflix serial Fedeltà, based on the novel of the same name by Marco Missiroli. Is fidelity related to ourselves or to others?, we ask ourselves when we see her and we ask her as well. Should we impose our ego or renounce our coherence of life, with all our aspirations and dreams, to live with the other? “Faced with this enigma all certainty melts away, reality becomes subjective and relative, blurring with appearance”.

A modern declination of Pirandello’s “Così è se vi pare”, which poses the question of whether appearance is deception, a form of illusion, or the simple substance of life. “I believe in sincerity”, Carolina points out, “I believe in the importance of being honest with oneself. With your own partner, whichever one, there must always be a dialogue, especially when something is wrong or does not work as it should. Never deny the evidence. If there is a problem, it has to be faced and solved, even if you don’t always succeed. Of course we know, situations in life can be very complex, but trying is fundamental”.

“I continue not to have any illusions, which in hindsight is the most beautiful illusion”

Carolina, in everything she does, has tried, with a determination that has never become an obsession. “I live in absolute normality, the success I have achieved with my work has not changed me, if only financially and in experience. My real friends remain the same, they continue to tease me in the same way (laughs, ed.). I know my job can be uncertain, but I live in the moment, and for now it’s OK. Then, whatever happens, I will know how to reinvent myself”.

In the meantime, we wait for her new film that has been shot in Rome, which she can say nothing about, thus maintaining that right fascination that gives mystery. “I’ve been going to Rome for a while now, I always feel ‘borrowed’, I feel a different and beautiful air; I feel good here, because in addition to the beauty of the city, i made sincere friendships over the last few years. When I am there, I think about Venice, which I always have in my heart, and I continue to keep my feet firmly on the ground, to think about the things I do and not about how I could be or what I could do. I continue not to have any illusions, which in hindsight is the most beautiful illusion”. 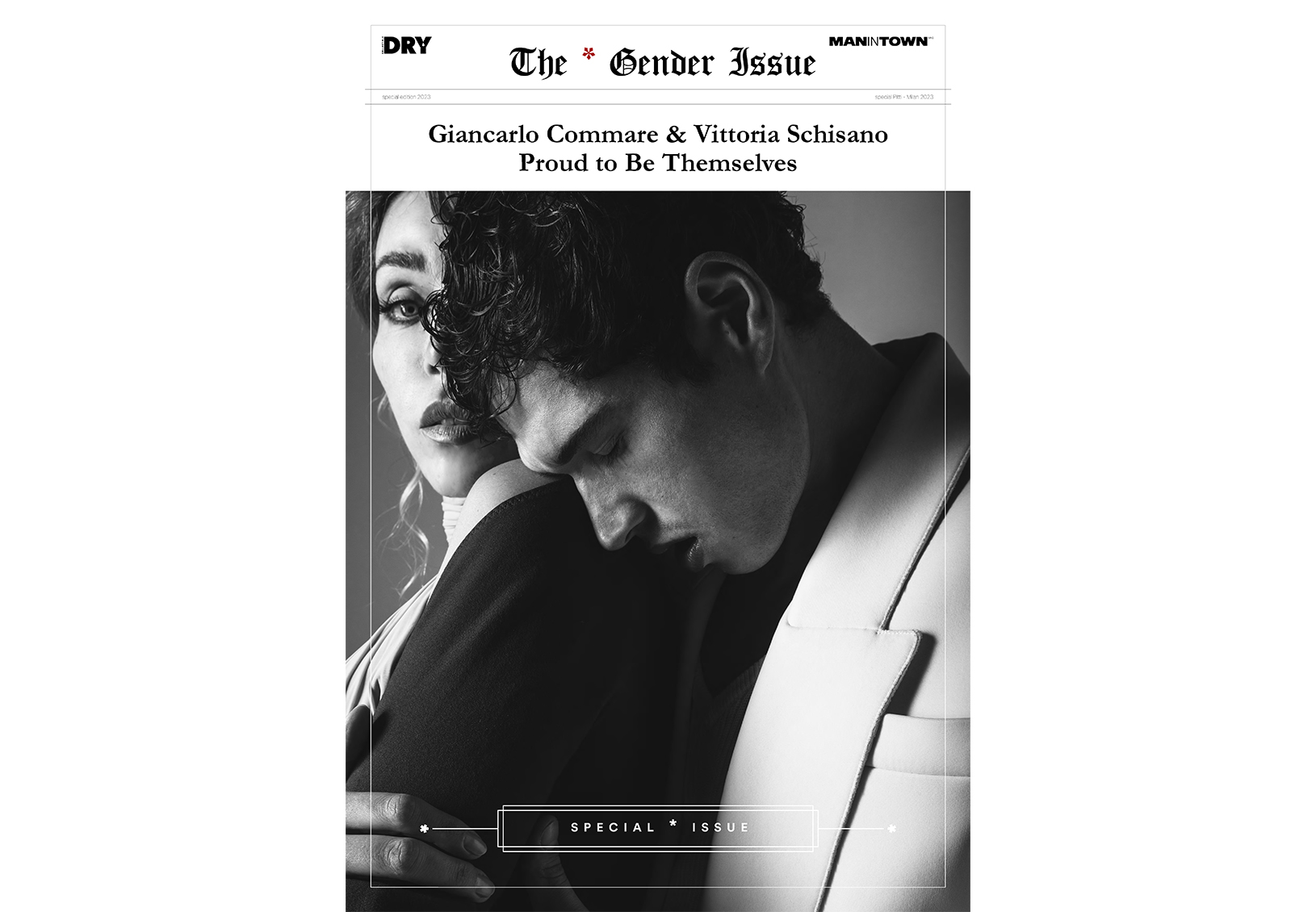